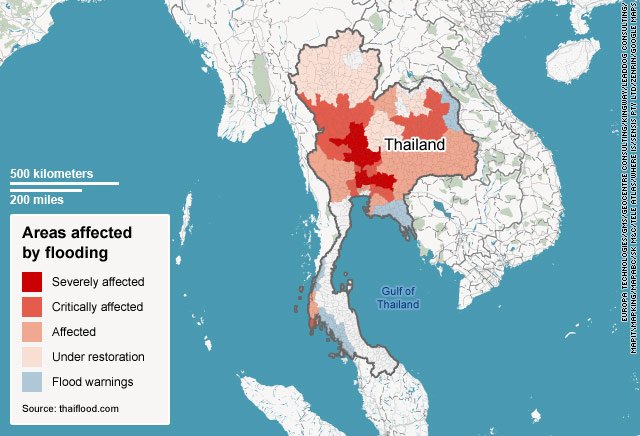 Most of the factories in seven inundated industrial estates should be able to reopen within 45 days after floodwaters recede as the government has vowed to provide full financial support for their rehabilitation.

For estates incapable of raising funds for immediate investment in infrastructure rehabilitation, the government would act as a middleman to seek new investors to take over the projects.

Saha Rattananakorn in Ayutthaya is facing the highest likelihood of being acquired by a new investor.

The plans emerged at a meeting chaired yesterday by Deputy Prime Minister Kittiratt Na-Ranong, where the executives of the seven affected estates discussed the short-term rescue plan for their operations.

According to Prasit Hitananant, managing director of Saha Rattananakorn, the estate entered the rehabilitation process in 2009, with Bangkok Bank as its major creditor.

Prior to the flooding, Mr Prasit was confident the company would survive, but now he is prepared to turn over control of the business.

He said that like most small industrial estate operators, his company might not be able to mobilise enough cash to rebuild infrastructure soon enough and Mr Kittiratt pledged to find investors to buy the company.

Saha Rattananakorn covers 2,050 rai, 800 rai of which are used by factories while the rest is a land bank. The Sahapat Group has six factories at the site.

Thavich Taychanavakul, managing director of Hi-Tech Industrial Estate, said it would resume operations by mid-December if the floodwaters recede early next month.

At Hi-Tech in Ayutthaya, all 130 factories have been inundated by floodwaters 3.40 metres high.

“It will take up to 10 weeks to drain away 12 million cubic metres of water in our facility,” said Mr Thavich.

“After that, we will need 90 days to clean up,” he said, adding that 70% of the 220 factories in Nava Nakorn in Pathum Thani had been inundated.

However, it will take about one year for Nava Nakorn to fully rebuild its infrastructure. By next week, it will assess the losses caused by the floods.

“After discussions with Japanese investors at the industrial estate, some are keen to relocate their production outside Thailand,” Mr Nipit said.

He also called on the government to think about an early-warning system that would give operators two to three months’ advance notice of flood risk based on weather patterns and water movement north of the area.

“We received the warning 12 days before the water arrived and we didn’t have time to prepare anything,” Mr Nipit said.

“We might have to import some products from other Toshiba units in Indonesia, China and Vietnam or hire other unaffected producers in Thailand to make some home appliances,” said Ms Kobkarn, who is also the chairwoman of Bangkadi Industrial Park in Pathum Thani.

“Nonetheless, Toshiba’s headquarters in Japan has sent us a clear message about confidence in Thailand. We will not move to somewhere else,” she said.

“If we can reopen within 45 days as targeted, we will be able to retain all existing factory staff.”

Within two months, details of measures and projects for future flood prevention will be finalised.

“We are asking non-affected industrial estates to help absorb some of the workers at inundated areas who will potentially lose jobs,” Ms Anchalee said.

“As an investor, I’m very happy with the counter-measures and action plan agreed at the meeting,” he said.