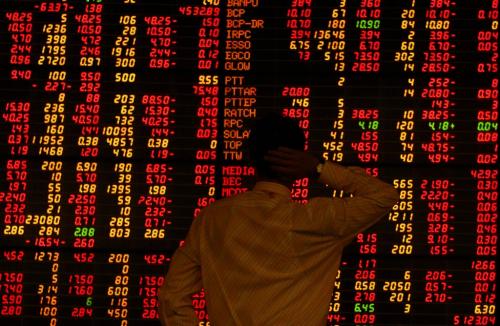 Major banks and the Stock Exchange of Thailand (SET) have warned that investors should keep a close watch on efforts to resolve the European Union’s escalating sovereign-debt problems, as the crisis could affect the Thai economy, including the capital market.

Meanwhile, lower September inflation figures released yesterday could leave more room for the Bank of Thailand (BOT)’s Monetary Policy Committee not to raise the policy interest rate at its next meeting on October 19.

The central bank has hiked the policy rate seven times since October last year. The current level is 3.5 per cent.

SET president Charamporn Jotiksthira warned investors to closely monitor Europe’s sovereign-debt problems, as there are still no signs of a permanent long-term resolution of the crisis.

The SET Index suffered another blow yesterday, plummeting 46.90 points, or 5.12 per cent, to 869.31 on concerns over Greece’s likely default on its debt repayments. Turnover was Bt26.64 billion.

Reports that the country will not meet its deficit-reduction targets have driven markets down worldwide.

Pongpen Ruengvirayudh, a senior director of the BOT, said the fall in Thai stocks was the result of risk aversion on the part of investors.

While this would likely last for some time, she said there was no need for Asean countries to concertedly launch measures to deal with it.

The Bangkok University Research Centre said the next Thai economic-forecast index would drop to 47.46 points from the previous survey result of 62.11 points, reflecting an expected economic slump in the next three to six months. The centre’s Bangkok Poll, which surveyed 63 economists and analysts from September 26-30, showed economic growth is expected to continue slowing over the next six months. The centre said it was an important warning sign for the economy when the index fell below 50 points.

The key factors behind the predicted contraction in the next three months are lower consumption, reduced spending by the private sector, lower exports and a decrease in the number of tourist arrivals, it said.

The only factor with a predicted increase is government spending, although this too is expected to fall within a six-month time frame.

The combined effect is that the economy will sink into a deeper slump, the centre said.

Deloitte Research reiterated that the economy is expected to grow by between 4 and 4.3 per cent this year on rising domestic demand, against a backdrop of Europe’s escalating debt crisis and the Kingdom’s relatively fragile political environment.

“The outlook for the Thai economy is mixed,” the research house said in its “Asia-Pacific Economic Outlook”.

Domestic demand could increase on rising income in the agricultural sector after a good harvest and improved consumer and business confidence following the election, it said.

Despite the high level of Thai exports, the escalation of the euro-zone debt crisis and a likely US economic slowdown could potentially damage the export sector, it added.

Thailand’s inflation eased to a six-month low in September as fuel prices slid, countering an increase in food costs after the worst floods in 50 years damaged crops.

The Bank of Thailand may keep the benchmark interest rate unchanged at its next meeting because inflation will continue to ease as oil prices decline, he said.

“The Bank of Thailand’s response to rising inflation has been aggressive, and inflation levels may recede to 3.5 per cent by 2012,” said Deloitte Research, which expects inflation to be in a range of 4.2 to 4.4 per cent this year.

Combating inflation remains a major challenge for policy-makers when they meet on October 19, it said. September inflation was marginally above the consensus of 3.9 per cent but much lower than the August level, convincing Barclays Capital that there will be no more policy rate hikes this year or in the first half of 2012.

“We are monitoring the situation in the euro zone over the next few days, as the effects might spill over to the region, including Thailand. If the crisis cannot be resolved, the global economy might return to a backward trend next year,” he said.

In a telephone interview, Apisak Tantivorawong, president of Krung Thai Bank, said major banks were projecting loan expansion next year to be two to three times the growth in gross domestic product.

However, the Thai Bankers Association expects loan growth will be between 6 and 8 per cent next year, in line with this year’s level, said its chairman, Chartsiri Sophonpanich.

The European debt crisis will continue to affect financial markets, but it will not have a significant impact on the local economy, he said.

He added that the euro-zone debt crisis would not affect lending by the Thai banking sector next year if Asian countries could maintain growth and create opportunities for investment.

Sukdee Chongmankhong, chairman of the Credit Card Club, said in a telephone interview that if inflation and fuel prices were high next year, spending via credit cards would also be high, unlike commercial loans, which grow in line with economic expansion.