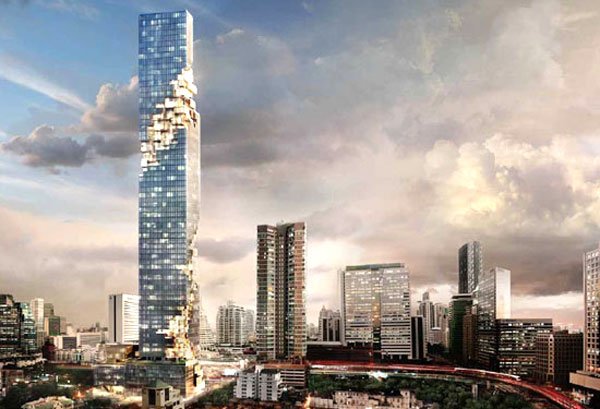 Despite fears of a bubble from some experts, Bangkok’s property boom continues and a new 77-storey tower could take over from the Baiyoke Tower as Bangkok’s tallest building. Expected to be completed in 2014, the MahaNakorn’s unique design will surely be a standout on Bangkok’s skyline, according to AFP.

Reaching 315 metres into the sky, MahaNakorn carries a price tag of THB19 billion (US$640 million) and will host apartments, retail options and a Ritz-Carlton Hotel. The ambitious project comes as Thailand’s economy appears to be experiencing healthy growth, with GDP rising 7.8 per cent last year despite two months of street protests in the capital.

The Bank of Thailand deemed 2010 a “golden year for real estate businesses”, and credited low interest rates and consumer confidence as major drivers of a large demand for property and a dearth of new construction projects: there was a 13.6 rise in registrations of new homes last year.

The bank assured investors that it was being very careful in watching for signs of a potential bubble, but was finding little to worry about. However, the bank did express concern about increasing amounts of speculation from buyers.

As demand slowed after the June 2010 expiry of stimulus measures – such as two-year interest-free home loans for first time buyers – developers increasingly resorted to high-risk strategies in their fight to fill properties.

Homebuyers with “insufficient purchasing power or subprime customers” were persuaded to buy, the bank said, while lenders also boosted the number of loans at 90 percent or more of the property value.

Property research group Agency for Real Estate Affairs (AREA) said it had detected a build-up in oversupply and warned that the level would become unsustainable.

Its figures show there were more than 135,000 unsold property units in Bangkok and its suburbs as of July 2011, including projects under construction. Another 100,000 units are expected to come in to the market next year.

“If something happened to our economy or politics, it could cause the bubble to burst,” he said.

But Kobsidthi Silpachai, head of markets and economic research at Kasikorn Bank, said Thailand’s economic health meant it was in a better position than in 1997, adding that if a bubble did burst its impact would be limited.

“If it did really happen it would certainly affect industries related to real estate, like steel and cement, but it would not affect other businesses,” he said.

Developer Sorapoj shrugged off jitters over the health of the real estate sector, although he conceded that the Red Shirt protests had hurt interest from foreign investors.

He was confident Thailand’s incoming leadership — which is affiliated to the Red Shirts and won a thumping majority in the July 3 election — would be able to avert any threats.

“I’m not worried about oversupply. The new government will do whatever it takes to prevent bubbles,” he said.