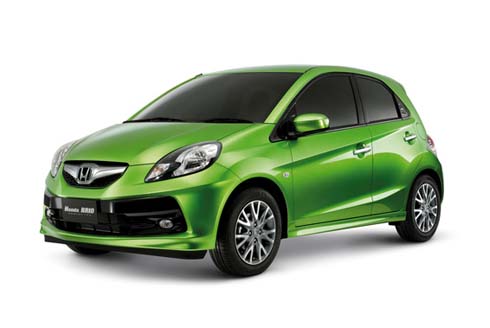 Honda and Mazda launched two bread-and-butter models in Thailand yesterday, and are expecting to increase market share with them.

Honda launched the Brio city car, which is made under the Thai eco-car programme, while Mazda introduced the redesigned Mazda3, which is being produced in Thailand for the first time.

The Brio is powered by a 1.2-litre 90-horsepower petrol engine capable of running on E20 gasohol. Retail price starts at Bt399,000, slightly higher than the Nissan March, which is also made under the eco-car programme and was intro?duced in March last year.

Honda plans to sell 40,000 units of the Brio this year, making it a major model in its product line-up.

“Consumers’ trust and acceptance of Honda vehicles are attributed to our commitment to understand their lifestyles and needs, and our ability to exceed their expectations,” said Atsushi Fujimoto, president of Honda Automobile (Thailand) Co Ltd.

“The Brio will definitely appeal to people who are looking for a stylish, compact but spacious eco-car that is fuel-efficient, safe and fun to drive, and environment-friendly.

“Honda’s innovations in the Brio will raise and set new standards for eco-cars in terms of design, packaging, cabin comfort, and fuel-efficiency. In addition, the affordability of the Brio will enable more customers to experience the joy of owning and driving a Honda car.

“Without a doubt, the Brio will stir excitement in the eco-car segment and expand Thailand’s passenger-car market,” he said.

Honda was the first compa?ny to raise the idea of the eco-car project with the Thai government.

Among the incentives offered under the programme are preferential excise tax rates of 17 per cent in the domestic market (versus the 30 per cent applied to conventional cars), duty-free machinery imports, and a five-year tax holiday. In return, manufacturers must achieve minimum output volumes of 100,000 vehicles per year by the fifth year of production.

To qualify as an eco-car, a vehicle manufactured in Thailand must be fuel-efficient, consuming 5 litres of fuel per 100 kilometres; meet a minimum pollution standard of Euro 4, emitting no more than 120 grams of carbon dioxide per kilometre; and satisfy safety standards for both front and side impacts as specified by the United Nations Economic Commission for Europe Regulations 94 and 95, respectively.

Mazda plans to sell 7,400 units of the Mazda3 this year. The car is made at the AutoAlliance (Thailand) plant in Rayong, which is a joint venture between Ford Motor Co and Mazda Motor Corp.

Choichi Yuki, managing director of Mazda Sales (Thailand) Co, said: “The official launch of the new-generation Mazda3 [is] another historic event for Mazda in which we can continue the leapfrog success from last year, and we hope to sell 38,500 vehicles in Thailand this year.

“We have had positive response form customers for the Mazda3 market survey – apart from the sporty character, the new Mazda3 also offers [as much] performance and quality as European luxury cars,” he added.

Marketing director Sureethip La-Ongthing Chomthingdee said the Mazda3 was the most talked-about car, from the first generation to the new generation.

“The marketing direction will concentrate on presenting the image of being the best sports sedan in the C-car [compact] segment, which is the main market for many brands,” she said.

“There are still areas in the market that are not dominated by any brand, and [offers] alternatives with new choices for consumers. The choices consist of Japanese cars with as much quality as European cars, outstanding performance and safety with high driver enjoyment.”