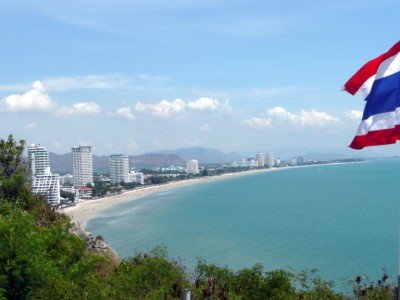 According to Risinee Sarikaputra, associate director of research and consultancy at Knight Frank Chartered (Thailand), beachfront condominiums are be difficult to find due to the scarcity of beachfront land in the area, thus the selling prices are expected to increase.

There will also be more demand from foreign buyers due to the convenience of the location with its complete facilities.

“The lack of good beachfront land plots in Hua Hin has resulted in condominium development moving south to Pranburi and north to Cha-am,” said Risinee. “Currently, there are many big players entering the market. This will increase the tension to smaller-scale companies and privately owned ones that have developed in the area. The next surge in condominium developments is most likely to take place in Khao Takiab, Cha-am, and Pranburi”

According to Knight Frank Thailand Research, the total condominium supply in the Hua Hin area as of the end of 2010 was 6,504 units, accumulated since 2003. The figure is for the cumulative supply in Cha-am, Hua Hin, Khao Takiab, Khao Tao and inland areas. The large volume of additional supply was shown in 2007, with about 2,121 units, followed by 1,506 in 2008 and 778 in 2010 respectively.

There were many additional supply added in the inland area during 2007 and 2008 particularly in the South Hua Hin area because of  convenient access to public transportation and close to many shopping centres, restaurants and other facilities.

Based on the Knight Frank survey, the majority of unit types being marketed are two- and one-bedroom units, accounting for 41 per cent and 38 per cent of the total supply respectively. The market shows a low supply of the three-bedroom (6 per cent) and four-bedroom (1 per cent) types.

Currently, there are 10 condominium projects with a total supply of at least 1,500 units planned for development in Cha-Am and Hua Hin. Of which, only three projects are new condominium developments, while the rest are expansions of existing developments.

Risinee added that most of the future projects would be located in the inland area, while a project developed by Prime Nature Group will be located in Cha-Am. Another project will be in North Hua Hin, where SC Asset recently bought a 10-rai land plot.