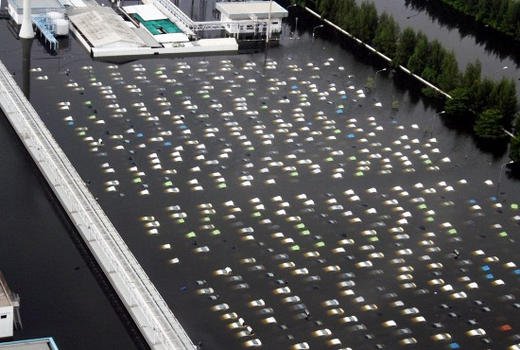 The Kingdom’s most powerful private-sector organisation has called for the government to protect the remaining industrial estates in the eastern part of Bangkok stringently, otherwise the losses from the devastating flooding will soon exceed Bt1 trillion. The current estimate is for losses of between Bt400 billion and Bt500 billion.

After yesterday’s meeting of the Joint Private Standing Committee – comprising the Board of Trade of Thailand and the Thai Chamber of Commerce, the Federation of Thai Industries (FTI) and the Thai Bankers Association – the private sector expressed extreme concern about the safety of the remaining industrial estates now that flood water had rapidly begun to penetrate Bangchan Industrial Estate.

The organisations on the committee shared the view that the government must urgently protect industrial estates in the eastern part of Greater Bangkok to boost confidence and minimise losses.

Pornsilp Patcharintanakul, vice chairman of the Thai Chamber of Commerce, said the government should urgently decide on an overall water-management plan for the crisis, as it had only been tackling problems on a piecemeal, day-by-day basis.

“If the three industrial estates in the eastern parts, namely Bangchan, Lat Krabang and Wellgrow, [are inundated] the losses will be greater than Bt1 trillion, while investors’ confidence will be destroyed and they could consider [moving] investment overseas,” he said.

Previously, the private sector had estimated the losses at between Bt400 billion and Bt500 billion after seven industrial estates were flooded.

Pornsilp said private enterprises, foreign investors and the general public were questioning the government’s competency to manage the crisis after flood water has gradually entered central Bangkok. The overall losses to the economy would be even more extreme if the inner city were to be affected, as the trading and service sectors would then also be directly hit.

He suggested that the government call for assistance from other experts such as engineering associations, the business sector and foreign countries, as it has to date shown a low level of efficiency in managing the flow of water and recovering damaged sectors.

He added that the government should carefully plan to spend Bt500 billion in recovering each damaged sector urgently, as well as seeking long-term measures to prevent future flooding in order to restore investor confidence.

FTI chairman Payungsak Chartsuthipol said that to ensure private-sector confidence, the government should do everything possible to protect the major part of the capital.

He said the country had already lost several billion baht a day from the slowdown in both domestic and export trading due to the severe floods.

He called on the government to stimulate domestic and overseas trading urgently, as well as do its utmost to protect industrial estates.

Meanwhile, the Japan-Thailand Joint Trade Committee meeting between the Joint Private Standing Committee and the Japanese Businesses Federation has been postponed from November 28 to early next year because so many Japanese factories have been affected.

Chartsiri Sophonpanich, chairman of the Thai Bankers Association, said banks were waiting for clients to estimate their losses so that they can consider extending soft loans to affected businesses.

He said it would take at least a month for flood relief and about three months for flood-damaged businesses to restart operations.

He added that the rate of non-performing loans now was expected to exceed 5 per cent across the banking sector as many companies have been hit by the floods.