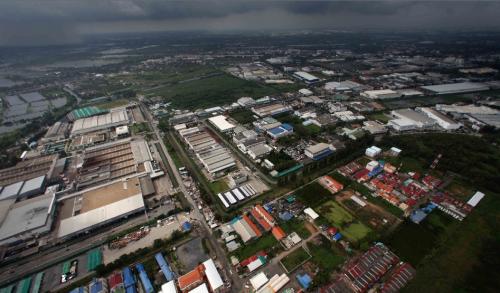 The industrial estates situated in the eastern part of Bangkok are at risk to face with low-lying floodwaters, as the Industry Ministry could not assure the safety.

Meanwhile, the Japan Chamber of Commerce (JCC) has asked the government to carefully drain out the water from the floodhit area to the Eastern part of Bangkok in order to reduce the impact not to spread to other industrial estates.

Wannarat Charnnukul, Industry Minister, said it was difficult to confirm whether or not the industrial estates located in the ways that the water will be drained out will suffer from the floods.

Kyoichi Tanada, president of JCC and president of Toyota Motor Thailand, said the government had to be well planned for draining out water from the flood-hit areas to the Eastern part of Bangkok as there are many manufacturing plants located there. The government should gradually drain out water and control the amount of water released from Ayutthaya.

Setsuo Iuchi, president of Japan External Trade Organisation (Jetro), said the Jetro had issued the relief measures required the government to support so as to reduce the impact to the Japanese investors. They wants the government to drain out water as soon ad possible, and assist the flood-hit companies to move out the machinery from the industrial sites. The government should also release the updated information and relief measures in English language promptly.

He said the requirements also included the provision of subsidies for the companies that want to keep their labours during the suspended operation, the import tax exemption for machinery and parts needed for substitution. Besides, the Japanese investors also ask the SME Bank to provide financial services to the Japanese ones, and the exemption, reduction or deferred payment of corporate tax to the suffered companies.

They also ask the Board of Investment (BoI) to allow the suffered companies to restart their operations with new machinery as well as bringing out machinery to other sites outside Thailand without prior notice or permission.

Iuchi said many Japanese investors still consider investing in Thailand after they suffered from the tsunami in March this year. Jetro had to inform the accurate information about the floods in Thailand and let them make the judgement themselves whether they still want to invest in this country.

“We still hope that floods will not hit other industrial estates such as Bangpoo, Latkrabang, and Wellgrow so that the damage will be limited,” he said

Payungsak restated that the industrial sector wanted the government to postpone the implementation of minimum wage hike to Bt300 until 2013, set up a fund to provide soft loans, to the companies that want to still hire workers to prevent the unemployment problem.

Deputy Prime Minister and Commerce Minister Kittirat Na-Ranong yesterday expressed his concern over the withdrawal of foreign investors’ production base if the government has no apparent guidance to resolve the damage from flooding.

“I concede that I’m worried about those who are foreign investors will move their production bases out of the countries after some industrial estates in the central region have been submerged by floodwaters,” said he.

The nation’s worst floods in five decades have closed about 1,000 factories operated by companies including Honda Motor Co and Canon Inc and disrupted supply chains for manufacturers such as Toyota Motor, Western Digital Corp, which relies Thailand for 60 per cent of production, may see exports from the country slide as much as 40 per cent to Bt120 billion ($3.9 billion) this year after floods shut two of its plants. The company counts HewlettPackard Co, Dell Inc and Acer Inc among its customers.

Flooding in recent months has devastated parts of Thailand, including areas where factories that produce parts for the Mac computer line. Some of those factories have been shut down, and Apple is now looking into what impact that may have on its computer production timeline.

“Our hearts go out to all of the people in Thailand who have experienced these devastating losses of life and property as a result of the monsoons and the flooding,” Apple CEO Tim Cook said during the company’s fourth fiscal quarter earnings call Tuesday afternoon. “There are several factories that are currently not operable and the recovery timeline for these factories is not known at this point.”