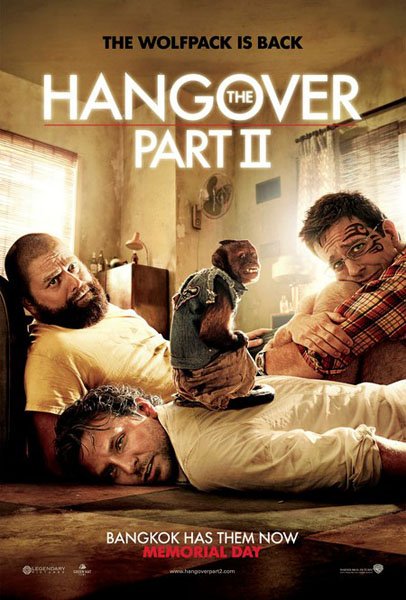 The Thai tourism industry can thank the Hollywood film Hangover 2 for creating a new tourism route for fanatics wishing to follow the movie’s shooting locations in Thailand.

“Hangover 2 has helped to promote Thailand and after its success, several foreign filmmakers are more confident about shooting their movies here,” said Wansiri Morakul, the director of the Thailand Film Office, a unit of the Department of Tourism (DOT).

The past two years, a number of foreign film productions were worried about shooting their movies in Thailand due to the political turmoil, she said. However, revenues from foreign movies, features, documentary films, advertising and music videos did not drop.

The DOT reported 578 foreign productions were filmed in Thailand last year, generating 1.87 billion baht in revenue for the country, up from 496 films and about 900 million baht in 2009.

During January to May of 2011, there were 287 foreign films shot here generating 621.66 million baht in revenue.

Ms Wansiri said most foreign movies prefer to shoot in locations such as Phulay Bay Ritz Carlton (Krabi), a speedboat on the Chao Phraya River, Chinatown in Bangkok, Chiang Mai Monastery and the Sky Bar at Lebua, State Tower.

“This is proof that Thailand is still safe for film productions and we project revenue from foreign shoots will reach 2 billion baht this year,” she said.

Thailand offers a value-added tax (VAT) refund in cash and is considering 20-25% tax credits for foreign filmmakers who do business here.

Sasisupa Sungvaribud, president of the Foreign Film Production Services Association (FSA), said although Hangover 2 has made foreign filmmakers more confident, there are still some unfavourable issues for foreign film companies.

She pointed to tax incentives as key to attracting foreign filmmakers, but the government has stalled on passing any.

“If we don’t offer them any incentives, there are plenty of other places that will,” said Ms Sasisupa.

For example, South Korea offers a tax refund of up to 25% of total expenditures when shooting in its country.