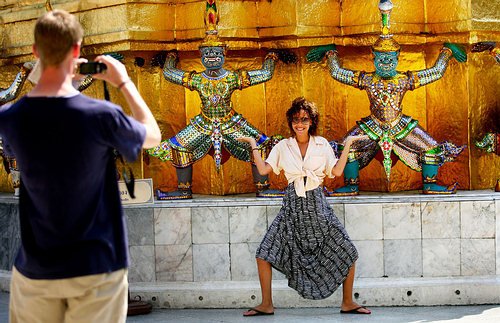 The Federation of Thai Tourism Associations is urging the government to extend its visa-fee waiver to next September in order to lure more tourists. The Foreign Ministry launched the year-long waiver in March as a move to stimulate the tourism market, which was badly hit by the closure of Bangkok airports late last year. Charoen Wanganaond, FETTA’s spokesman, said the number of tourists from key markets such as India and China had increased significantly due to the measure. Normally, Thailand attracts some 250,000 Asian tourists between December and February every year, but the number rose to 560,000 between March and July. “The federation believes the measure will boost inbound tourism this year,” Charoen said. The federation comprises the Association of Thai Travel Agents, Thai Hotels Association, Thai Travel Agents Association, Association of Domestic Travel, Thai Eco-tourism and Adventure Travel Association, Thai Transport Operators Association, Thai-Japan Tourist Association and the Thai-Chinese Tourism Association. Charoen said FETTA also wanted the government to waive the Bt80-per-room fee because this would help hotel operators cut their operating costs during these difficult times. Thai Hotels Association president Prakit Chinamourphong said there were some 400,000 jobless people in the tourism sector, though 5,000 of them had already undergone the government’s “Ton Kla Archeep” training programme and were ready for new jobs in the industry. He added that budget airlines and cruise operators were expecting the sector to recover by next year, though this might be hampered by the lack of a Tourism Authority of Thailand governor and chairman of the board, who are scheduled to be named by January. Nikorn Chamnong, advisor to the minister of agriculture and cooperatives, is rumoured to be the top candidate for the chairman’s post, though he has denied it. In addition, FETTA asked the Tourism and Sports Ministry to delay its plan to sign up for the Asean Free Trade Agreement on tourism. “We are not ready to open the country just yet because we are still weak in foreign languages, IT and capital compared to other countries. If we do open up next year, we stand to lose more,” Prakit said.