Bangkok to build the US$490 million Super Skywalk 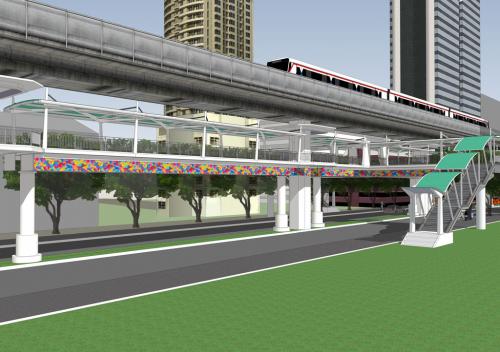 Bangkok Metropolitan Administration (BMA) annouced its plans to spend THB15 billion (US$490 million) on creating the Super Skywalk System, a 50-kilometre elevated walk way, as reported in The Nation newspaper. As part of the Krungthep Gao-na campaign initiated by Bangkok Governor MR Sukhumbhand Paribratra, the skywalk will be an integrated project that addresses the needs of pedestrians on a long-term basis.

According to MR Sukhumbhand, the system is scheduled for completion in 2015. The construction will divided into phases with the first phase starting next month. The first 16km-walkway will go down Sukhumvit Road, starting from Soi Nana and ending at Soi Bearing. It will also cover Phya Thai, Ramkhamhaeng and Wong Wien Yai. The second phase of 32km will cover Ratchadamri, Silom, Sathorn, Phetchaburi, Ramkhamhaeng, Ekamai, Thonglor, Phaholyothin, Thon Buri and the Bang Wa areas.

“The system would help Bangkok residents move around more easily in crowded areas,” said the Governor. “It will be linked to the mass transit system, such as the BTS and MRT, so we also hope that people will be encouraged to leave their cars at home.” The Nation